ARC of Going Down in Flames by Chris Cannon 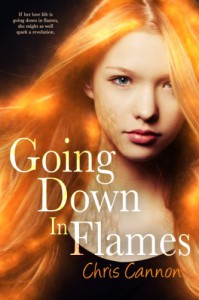 As I sat on my couch last night to ponder what book I wanted to read next in my ever growing list, I came across Going Down In Flames. It sat in my kindle gathering imaginary dust, and I thought to myself “ugh, here we go, another YA that I won’t enjoy. Maybe I’m getting to old for this crap.” So I put my literary big girl pants on and settled in to be disappointed (I know, optimistic right?), mind you, I was only going to read for a little bit since I started at 9:30 p.m.

Finding out on your sixteenth birthday you’re a shape-shifting dragon is tough to swallow. Being hauled off to an elite boarding school is enough to choke on.

Since Bryn is the only crossbreed at the Institute for Excellence, all eyes are on her, but it’s a particular black dragon, Zavien, who catches her attention.

Zavien is tired of the Council’s rules. Segregated clans, being told who to love, and close-minded leaders make freedom of choice almost impossible. The new girl with the striped hair is a breath of fresh air, and with Bryn’s help, they may be able to change the rules.

At the Institute, old grudges, new crushes, and death threats are all part of a normal day for Bryn. She’ll need to learn to control her dragon powers if she wants to make it through her first year at school. But even focusing on staying alive is difficult when you’re falling for someone you can’t have.

In the world of Going Down In Flames there are 5 different clans of dragons. Blue, Red, Black, Green and Orange. There are no marriages between clan, no offspring outside of the clans, of course until Bryn. Bryn’s father is a Red dragon and her mother is a Blue (no it does not make Bryn purple). At one point Bryn’s mother had an intended who was a fellow Blue dragon. Her parents fell in love, ran away and were shunned and outcast by the other dragons. Since the Directorate (ruling body to keep dragons under their thumb) has been preaching forever that two clans couldn’t reproduce, imagine their shock when it happened.

Days before Bryn’s 16th birthday, she has a run in with a stranger that knows all about her. At this point Bryn is completely clueless to what she is. The stranger sets of a chain of events that awaken Bryn’s powers. Since her parents had always been taught that different clans couldn’t cross breed, they were unsure if Bryn would ever show signs of turning. They kept being dragons a secret from her.

“What’s going on?” Bryn croaked.
Flames shot towards her father’s head. He laughed and dodged to the side.
“It’s simple. We’re dragons.”

“What’s going on?”
“You can breath fire.” Her dad smiled like this was a fabulous discovery.
Her mother’s expression became hopeful. “Do you feel a cold sensation in your stomach?”
“I just ate a half cartoon of ice cream.”
Ask a stupid question, get a stupid answer.
Clapping her hands like an excited toddler, her mom said, “Concentrate on the cold. Take a deep breath and aim for the sink.”
“She’s a Red.” Her dad puffed his chest out with pride. “We don’t know that.” Her mom leaned in and touched her cheek. “Try it for me. Just once.”
“What am I trying to do?”
“You’re trying to shoot ice out of your throat like a Blue dragon.”
“Right. How silly of me for asking.”

Since Bryn is an untrained dragon, she’s shipped off to a boarding school for dragons where she meets other dragons. Some that absolutely hate her existence and tell her that, some that are indifferent to her and a small few who are willing to take their chances befriending an “abomination”.

I loved everything about this book, the concept reminded me of Eon without the emperor undertones. Bryn was a fantastic lead, she was smart, witty, proud but also had her faults. Like every other YA, there’s a love story, you could say she’s also naive and you would be correct. She took shit from people, but wasn’t afraid to dish it out. She was a refreshing change in that she wasn’t a fucking doormat the entire book. She had doormat moments.

I can’t praise this book enough, and have recommended it to so many. I can’t wait for the sequel, so chop chop Chris Cannon… I need me some more dragons!!!

FYI, this review took me over a week to write, I couldn’t find the words to express my love for this. Every time I started to write again, I sounded like a first grader incapable of compound sentences. So hopefully this jibberish makes sense.